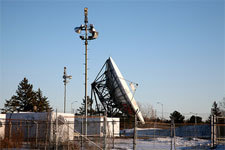 All electrical equipment produces both electric and magnetic fields with frequencies ranging from static D.C. fields through 60 hertz (Hz), and up to the microwave region with frequencies in the gigahertz (GHz) range. The magnitude of the field is related to the voltage and current, with voltage determining the magnitude of the electric field. Voltages above 10,000 V can produce significant electric fields and voltages in the 60,000 volt range and above can cause induced currents in ungrounded conductors and the human body. The current in a conductor determines the magnitude of the magnetic field and can become significant above 100 amps, at distances up to a few feet and at greater distances as the current is increased. For humans, high magnetic fields can interfere with implanted cardiac pacemakers and defibrillators. Fields from motors or busses carrying currents above a few hundred amps can have an influence on computer systems up to 20 to 50 feet, depending on attenuating material between the conductor and the computer system. At lower frequencies (DC and 60 Hz), both the electric and the magnetic fields must be measured to accurately assess the potential hazard. Some common sources include small motors (electric shavers, hair dryers, can openers), large motors used in industry, electromagnets, high current welding equipment, electric switchgear and transformers, and radio transmitters. Inside buildings the location of radiating sources can be important when deciding worker location. Making electromagnetic field measurements is not simply a case of holding an exposure meter in the air because the surveyor’s body can influence the measured field strength. It requires an understanding of the field parameters and the causes of interference. The following table shows typical field strengths from common household electrical items at the typical distance of use.

At this time there are no promulgated governmental limits for occupational or public exposure to stray electric and magnetic fields, other than a very general OSHA regulation (29 CFR 1910.97) which limits whole body exposure to 10 milliwatts per square centimeter (mW/cm2), in the frequency range of 10 megahertz (MHz) to 100 gigahertz (GHz). However, OSHA has been citing against the Institute of Electrical and Electronic Engineers (IEEE)/American National Standards Institute (ANSI) C95.1 consensus standard, Safety Levels with Respect to Human Exposure to Radio Frequency Electromagnetic Fields.

The concerns over exposure to electromagnetic fields are those due to the heating of body tissue causing tissue destruction (similar to cooking a roast in a microwave oven), cellular effects involving the transmission of certain chemicals in and out of the cell which can have both beneficial and detrimental effects, the induction of currents in the body which can affect tissues, and the increase in the probability of developing cancer and/or leukemia. Concern over the harmful effects from 60 Hz fields has been of concern since the late 1970's when Wertheimer and Leeper published a paper (1979) that suggested a two to three fold increase in leukemia, lymphoid tumors, and nervous system tumors in children who lived close to overhead high power lines. While the authors did not make actual measurements of the electric or magnetic field strengths, later measurements of some of the transmission lines showed magnetic fields of 0.9 to 35 milligauss (mG). Wertheimer and Leeper conducted a second study in 1982 (again without actual measurements) and suggested an increase in excess cancers of the nervous system, uterus, breast, and lymphoid tumors in adults. There has been significant negative criticism of the two Wertheimer and Leeper studies and their conclusions based on the low numbers of people involved and the lack of consideration of confounding factors. Tomenius in Sweden tried to replicate the Wertheimer - Leeper results in 1986. He measured field strengths in houses within 150 meters (450 feet) of transmission lines and concluded that children living in houses with magnetic fields greater than 3 mG had twice the probability of developing certain cancers than children living in houses where the magnetic fields were below 3 mG. The Tomenius study was also a case-control study and no confounding factors were evaluated. Tomenius was not able to demonstrate a direct correlation between field strength and cancer incidence. It was the Tomenius study that prompted the initial proposal of the 2.5 mG guideline as well as the October 1995 conclusions by the Criteria Group for Physical Risk Factors of the Swedish National Institute for Working Life. A comprehensive literature review of 60 Hz fields and cancer and leukemia induction was performed under the auspices of the New York State Power Authority and authored by Savitz (1990). The Savitz report suggested a correlation between nervous system tumors and transmission lines in children only (not adults); however, the author felt that the lack of a mechanism to explain causality left the study with questions. The primary conclusion of the Savitz study was that there is a suggestion of effects in children, but that much more research is needed. Savitz concluded no association in adults. This conclusion with respect to adults has been typically repeated in most studies. Studies of Swedish and Finnish overhead power lines published by Feychting and Ahlbom in 1993 again had conflicting results as they related to children (showing a positive association with some forms of cancer but not leukemia or other forms of cancer that were found to be positive in other studies). Feychting and Ahlbom found no association with respect to adults. To date no data have shown a correlation between fetal effects in women exposed to 60 Hz magnetic fields. However, the philosophy of prudent avoidance has been recommended until definitive data are obtained with respect to fetal and child exposures.

Health Physics Associates, Inc. has the expertise and equipment to measure and evaluate electromagnetic fields from static (DC) up through 6 GHz and can evaluate the potential for health effects from all industrial equipment, heating and curing equipment, motors and switch-gear as well as environmental exposures from transmitting towers and overhead transmission lines. We can also provide recommendations on field reduction and the potential risk to personnel having implanted cardiac pacemakers or defibrillators. Please contact us if your needs involve electromagnetic field evaluations.

Should you have questions about electromagnetic fields, do not hesitate to contact us.