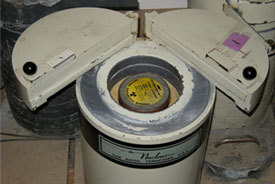 The photo (Shield 1) shows a lead shield that is part of a system used to analyze radon canisters.

Our radon testing program operates under the name A.B.E. Radiation Measurements Laboratory, a name we have used since 1985 for this part of our business. Who Are We? – We are an on-site radon testing company that specializes not only in residential tests, but also in apartment complexes, nursing homes, dormitories, schools, commercial buildings and warehouses, industrial concerns, underground mining applications, and soil flux measurements. We recently conducted tests for radon in the natural gas feed supply and ground level measurements of both the radon concentration in ambient air and the radon emanating from the soil at a gas fired power generator.  We are:

About 30 years after Columbus discovered America, a physician in Europe, Paracelsus, wrote a book that contained a reference to the fact that miners working the mines in the northwestern part of the Czech Republic and southeastern Germany died at a very young age. When lung cancer was discovered in the 1800s, it was realized that the deaths were not due to “unhappy mountain gods”, but to lung cancer. These were the same mines that supplied naturally occurring radioactive materials for the research of the Curie’s, Roentgen, and Becquerel in the late 1800s. When the Curies discovered radon in the early 1900s, the link between the mines and lung cancer was partially closed. It wasn’t until 1954 when an American scientist working for the U.S. Atomic Energy Commission realized that the real hazard was not the radon gas, but the particulate radon decay products attached to particles in the air. Numerous studies have been conducted on the health effects of breathing radon gas. In fact, the first scientific study of detrimental environmental effects and cancer was of radon and uranium miners. What we know is that in high concentrations there is a definite increase in the probability of developing lung and bronchial cancer. The debate is centered on how much and how long is too much!

Pennsylvania has been known since the 1950s to be rich in uranium, along with several western states. The most prominent uranium deposit, the Reading Prong, a granitic rock deposit that emerges in the Reading, PA area, continues northeast into New Jersey and New York. The same rock formation is found in Lancaster County, PA and in New England; however, in New England it tends to be a below grade formation. Because the Appalachian Mountains are very old, geologically, some of the uranium bearing rock has weathered off the mountains and is incorporated in the soil, extending many miles from the Reading Prong or other areas of the Appalachian Mountain range.

Personnel of Health Physics Associates have been measuring radon and radon decay products since 1973, primarily in underground mines and uranium processing mills, radium use sites being decommissioned, and industrial sites purifying uranium extracted from the ground. We were one of three companies on the first PA DEP list of radon testing companies and operate under the name, A.B.E. Radiation Measurements Laboratory. We were also a founding member of AARST (American Association of Radon Scientists and Technicians) and our president is still a current member. Our personnel have over 90 years total experience in making radon/radon decay products measurements. We were chosen to perform measurements of radon, radon decay products and unattached decay products and evaluate the potential for creating excessive concentrations of unattached decay products for Control Research Systems, Inc., a manufacturer of FDA approved medical HEPA filters. Based on these measurements, we presented testimony before the U.S. Environmental Protection Agency on behalf of CRSI. We have worked with large land developers in both Pennsylvania and New Jersey to evaluate the potential for soils to produce excessive radon concentrations and allow them to better layout the locations of buildings and greenspace and roads in their developments.

Our capabilities include: charcoal canisters for indoor measurements and continuous radon and radon decay product monitors, electret detectors, and Kusnetz and Tsivoglou methods, and surface flux measurements for research and diagnostic studies. Our extensive understanding in radiation biological effects means we can evaluate the true risk of radon exposures and not just provide a knee-jerk reaction to radon concentrations. As a testing only company we have no conflict of interest with mitigation. We are also capable of calibrating  gamma measurement equipment used for radon/radium measurements.

Should you have questions about radon or require radon testing or evaluation services, do not hesitate to contact us.